At work I started a green field C++ project using the meson build system. Unfortunately my favorite IDE CLion only supports integration with CMake out of the box. However with a bit of try and error I could make my favorite features work.

The trick to make code completion and other features work with meson is to use the compilation database support built into CLion. Now the database is just a json file listing describing all necessary commands to build the project. Luckily, meson supports generating one out of the box.

For this tutorial I will use the tiny sample project from meson docs as an example. So we start out with some code and a matching meson.build file:

Now as a first step we need to create a build directory using meson. This should be familiar for anyone using meson

Now, in your newly created build directory there should be a compile_commands.json, that is your compilation database. If it was not created, its pretty easy to generate: The build tool used by meson, ninja has built-in support for generating them 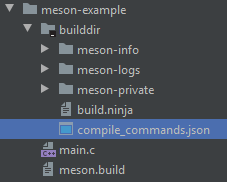 Next you need to change the project root, because clion automatically picks the directory containing the compilation database as project root. The project root can be changed using the Tools -> Compilation Database -> Change Project Root menu entry. 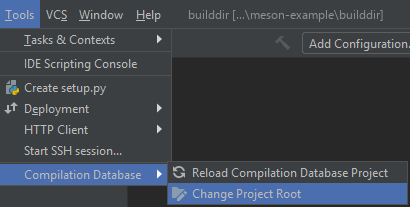 And that's pretty much it! If you change your meson.build files you will need to recreate the compilation database. One way to do this is using the File Watchers plugin. On any change to your meson.build, you can run ninja reconfigure and ninja -t compdb c_COMPILER cpp_COMPILER. CLion can also automatically reload change to the database, so it will automatically re-index all the files.

Trouble detecting the compiler on some linux systems

When I first tried this method on my fedora based system, it did not work because CLion failed to recognize the ccache command as a transparent cache for the following gcc command line. To fix this I head to tell meson to just use gcc instead of ccache gcc.